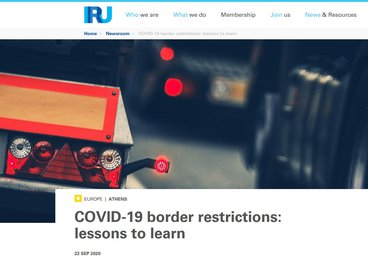 IRU published on 22nd September 2020, an article about the experience of 13 Greek truck drivers, who remained blocked in Iraq due to border restrictions at the region. Main message it to keep borders open for goods transport, for the benefit of the people working in the industry, and for the smooth operation of the supply chain as well! T

Thank you IRU for spreading the message around the world!

With the pandemic still at its peak in some parts of the world, and with fears of a second wave in others, unilateral border restrictions are still being put in place by countries, often with dramatic effects on goods transport and the essential workers and drivers who steer our products across international borders.

We asked Greek member OFAE, the Hellenic Federation of Road Transport, about one particularly alarming situation from early in the pandemic that saw 13 Greek trucks stranded in Iraq due to border restrictions in the region, and how situations like these can be prevented in the future.

What was the human impact of the trucks being stranded for four months?
The drivers spent 30 days in their trucks at the Iraqi border. The situation was stressful for them and their family members as they were unprepared for such a long stay on their trucks and began to run out of food, medical supplies and cash.

Two of the drivers are diabetic and we had to arrange for medicines to be shipped to them. One of them fell ill during this period, but luckily recovered quickly. Another had to be back in Greece before Easter for a scheduled surgery.

At one point, their return to Greece was very uncertain. Their families were extremely worried because COVID-19 was spreading rapidly and restrictive measures were making international travel almost impossible.

And what was the business impact?
On the business side, the vehicles were out of action for four months. While the drivers were able to fly home, they were forced to leave their trucks in Iraq. Most of the drivers are self-employed, meaning that these trucks are their only business tool. Only a few of them have an additional vehicle. For the self-employed, being unable to work for four months means a serious loss of income and customers.

"Our experience in Iraq shows why borders should be kept open for goods transport. Closing borders doesn't only block the movement of goods, it prevents us from doing our job. We are workers, not heroes. We want to be on the roads, not in the headlines."

Who helped resolve the situation and how?
The Greek Ministries of Transport and Foreign Affairs, especially the Greek consular office in Erbil, were heavily involved throughout. The Greek Ministry of Transport managed to get special permission for a flight from Erbil, Iraq to Athens, Greece, while all international flights to/from Iraq were suspended. They also chartered the plane and paid for the total cost of the flight.

Special thanks are due to our colleagues at the Union of Chambers and Commodity Exchanges of Turkey (TOBB) and the International Transporters Association (UND) who worked hard to help us find a solution and provided support to the Greek drivers, while they were stuck at the border.

OFAE acted as an intermediary and coordinated between all parties involved. We were in contact with the drivers and with their close family members in Greece every day.

Our association was also actively involved in trying to get some sort of compensation or recovery plan to provide financial support to the drivers. Senior OFAE officials had several meetings with Members of the Greek Parliament, and a number of official requests have been sent to the Greek government.

Protests at the BCP of Evzoni